Empires of the Void Review 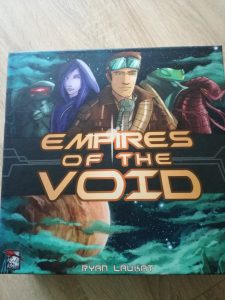 In a galaxy far away, war is raging: the Pyrious Empire is declining and struggle to maintain peace within his borders. Young alien races see this as their opportunity to become the new sovereign of the galaxy.

Over the different worlds, alliances form and battles occur, while pirates and rebellions try to get the best of the situation.

Whilst factories produce spaceships, troops are strategically being arranged. Do you have what is in you to take over the Pyrious Empire?

Space battle enthusiasts should definitely check out this science fiction game by Ryan Laukat. During eleven rounds, players will improve their fleet simultaneously before playing, in turn, three actions of their choice.

Empire of the Void actions

Every turn, a random event will be impacting the life on some planets. 3 times during the game, a scoring phase will be played. At the end of the last scoring, the Empire will know the race of their new ruler.

Empires of the Void features bright artwork, and the components are vey nice. The modular board is rather big and is beautiful. These are the components that you get with the game.

Place in the middle of the table the 7 galaxy hexagon tiles. Pyrious needs to be in the center, other tiles are placed randomly. Set the planet cards on the side of the board. 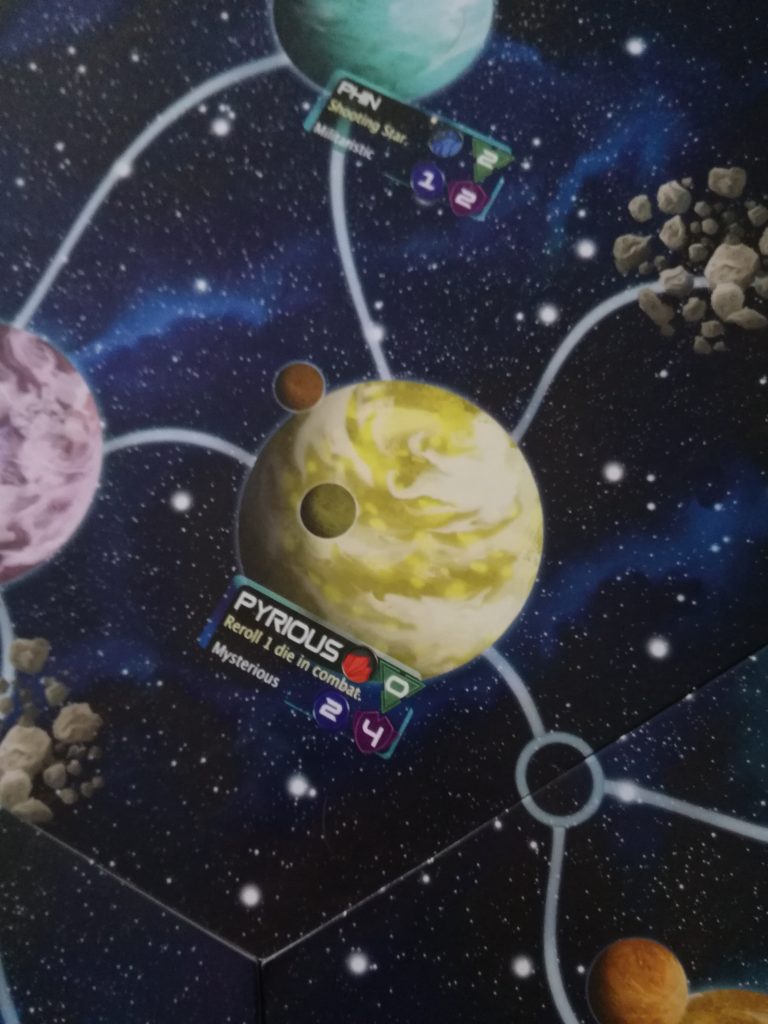 Pyrious needs to be placed in the center 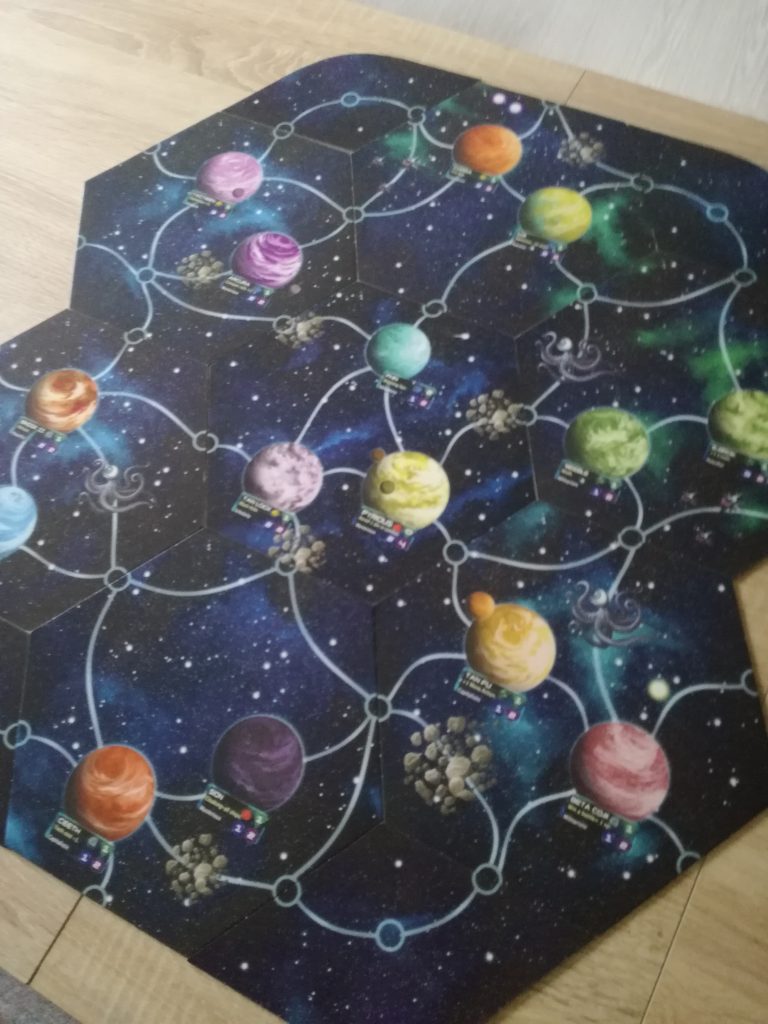 Place the required number of home planet boards – dependent on the number of players – in each corner of the galaxy. 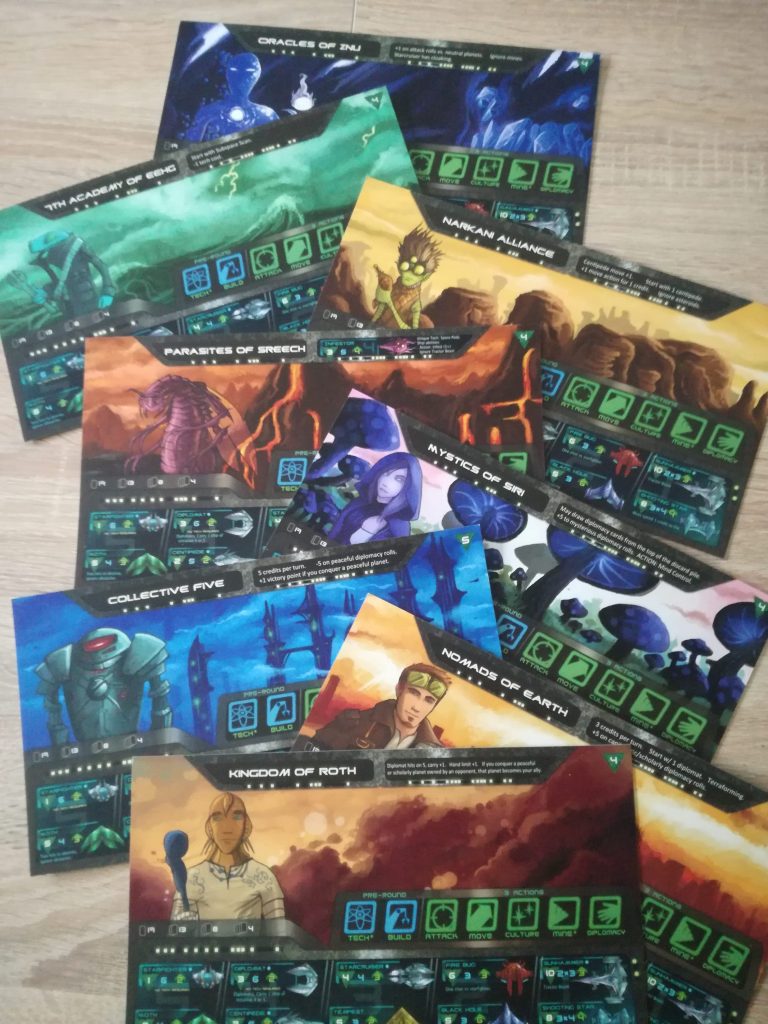 Every player receives a race card and places his home planet in the middle of his starting tile. 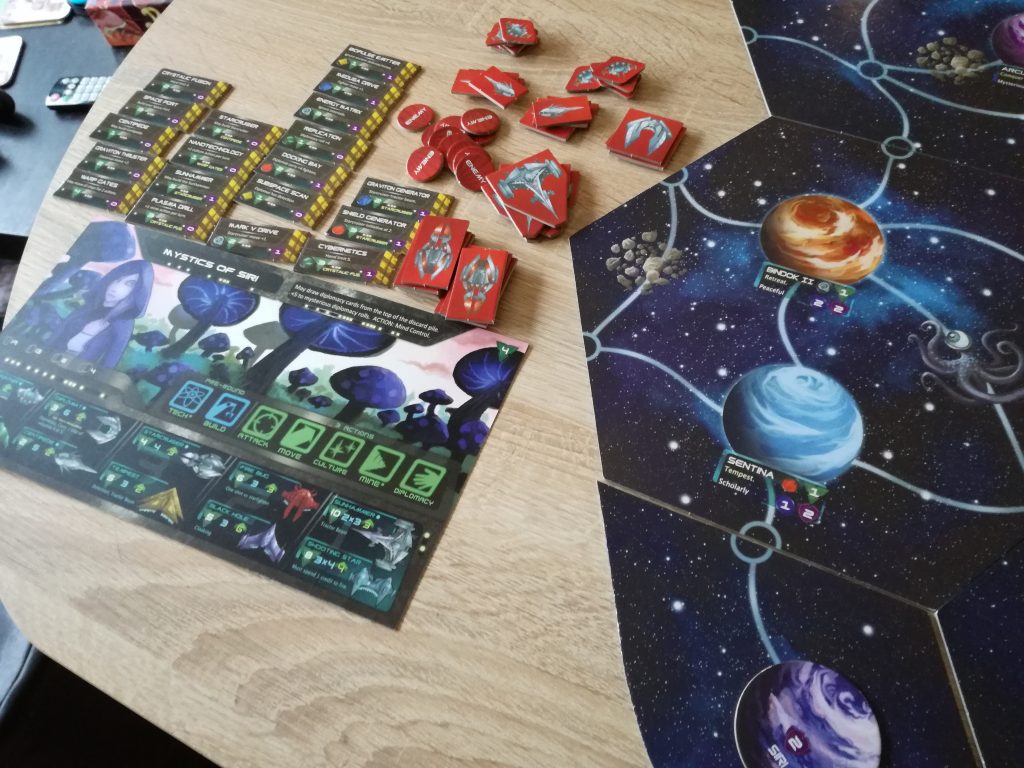 Each player also receives a set of spaceships and technologies, and a number of credit as mentioned on his race card.

Shuffle the event cards and:

Remaining events are placed back in the box.

Shuffle the diplomacy cards and place the deck near the board.

Set all remaining token and items in an easy to reach place next to the board. 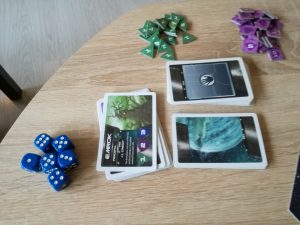 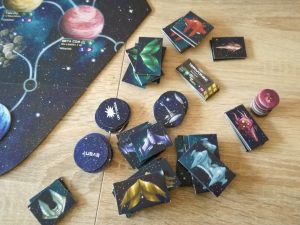 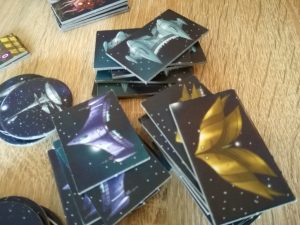 You are now ready to fight for the galaxy.

The game will play in 11 rounds. At the beginning of each round, simultaneously, players will be able to develop one technology – each of them have a credit cost, some would require resources harnessed on some planets, and some would pre-require another technology.

Each technology will offer the player with an ongoing ability shaping your strategy. Some technologies will also grant you victory points on every scoring phase.

During this pre-round phase, you will also be able to purchase ships. Every ship comes with his cost, his speed, his fire capacity and for some, additional bonus. Every ship also has an initiative which will prove an important parameter in the fights against other players: shoot first not to be destroyed!

Once every player has finished his pre-round, you can reveal an event.

Three will be scoring events: make sure to know when they happen as losing your planets before scoring will be of a great impact towards your final score.

Now, every player will go through their 3 actions, in the order of their choice. Over time, by discovering new technologies, players will be allowed to perform additional actions.

You will chose your actions amongst the following options:

Empire of the Void diplomacy difficult 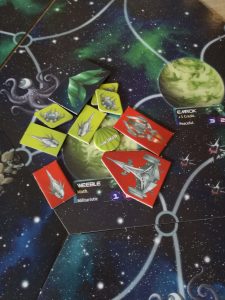 Fighting for a planet

Should you destroy every ships of an opponent controlling a planet as an enemy, you will chose whether to conquer the planet – put an enemy token on the planet – or liberate the planet – remove the enemy token that was here. Anyone will then be free to use a Diplomacy action on that planet. Note that you can liberate a planet allied to any player, you may only conquer it.

If the planet is neutral, you may try to conquer it: simply throw a successful attack on it to place one of your enemy tokens on top of it.
Conquered planets will offer you the resource, the credits and victory points. You will not gain any influence nor have access to its special ability.

Attacks are played throwing one or more 6 face dice: depending on the firing ship, you will need to roll equal or above a certain value: a Starfighter would need to roll a 6 to succeed, while a Sunhammer would throw two dice and every shot would be successful from 3 and above. 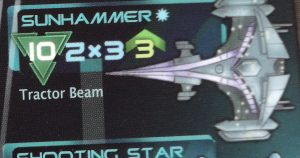 Empire of the Void: Sunhammer 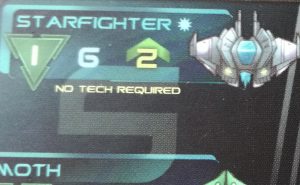 Once every player has finished his round, everyone earn their credits: take your original amount of credits plus all those your new allies and conquests offer. You are now ready for your next round. 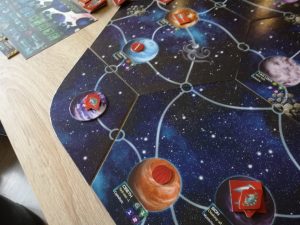 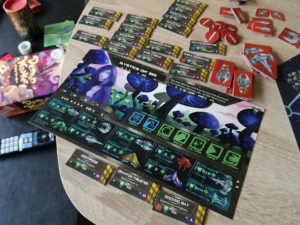 The first round may be slow as players will try to get through the rules, and as with most strategy games, you will often look at the rulebook to clarify some points. Once you have finished your first game, you will know all that needs to know: the rules are fairly well written and cover most points. Some area will surely need you to look at the rulebook a few times to clarify, but with less than 11 pages – including illustrations, clarifications and advanced rules – you will not lose too much time there.

Over time, you will only have a go to the rulebook to check some specific information about a race or a ship that you haven’t used often. 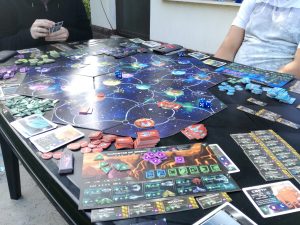 Empire of the Void: in game view

After a few games, you’ll have a good understanding of the sequence of play and interactions between the technologies: every player will then start making their strategy and while some will be more militaristic than others, there is not only one way to win. I would however recommend adding from the start the “turn order change” rule presented in the Advanced Rules. This allows for a more balanced game – the player with the most planets play first and may then lose some in the round, giving a chance to weaker players to get some back. << xx – in game view2.jpg >>

Make sure to save space on your table: taking over the galaxy sure needs a lot of it. But once you have placed up all the pieces, let the fight start.

Every game is different, and your opponents will not let you go off easily. Build on ships, target the planets to reach your goals and develop your technologies. Make good use of your Diplomats. The ways of this game are many, and playing against different opponents will change your experience every time.

Will you chose to be a Lord of War? Will you try your way through culture and influence? Your starting race will shape your path, but then: you’ll make your decisions.

The eleven rounds will go fast, and after each scoring phase, you’ll feel the urgency to build more ships, deploy faster, farther… and eliminate your enemies’ fleets.

With four players, a game will surely last more than two hours, but you will not see it go by. The lore and illustrations are also prompting imagination: don’t play your race, be one of them! And crush your opponents!

And what’s next? Building on the success of his game, Ryan Laukat funded a new Kickstarter campaign for Empires of the Void 2: the game sure looks exciting and I can’t wait for early next year to keep exploring the galaxy! 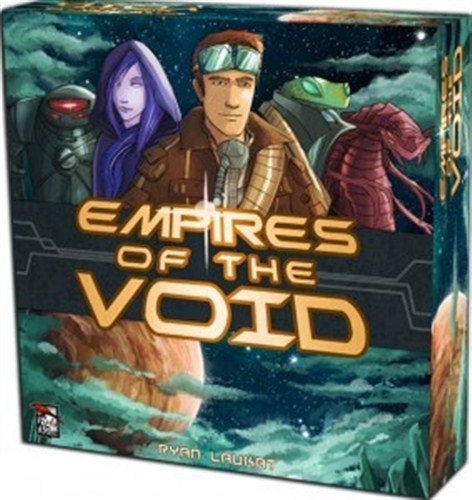 In a galaxy far away, war is raging: the Pyrious Empire is declining and struggle to maintain peace within his borders. Young alien races see this as their opportunity to become the new sovereign of the galaxy. Whilst factories produce spaceships, troops are strategically being arranged. Do you have what it in you to take over the Pyrious Empire?

Tom and Sam look at this space combat game. Get more reviews and videos at http://www.dicetower.com.

A quick demonstration of Empires of the Void II, using a hand-made prototype with lots of placeholder art. Visit the Kickstarter page: ...

Best Games for Traveling: Best games to play on an airplane or during a car trip