Do you wonder how to improve your child’s math skills while having fun at the same time? Then carry on reading. Shut the box is one of my favorite dice game. The reason I love it so much is that it is really easy to play. It can be enjoyed by the entire family, from 6  or 7-year-old children up to the grandparents. I used to enjoy playing Shut the box when I was a kid and I recently bought the game again for my family and we brought it with us on our last summer holidays in France. It was a great success and my wife and myself spend numerous evening playing shut the box in our mobile home with our 3 kids (7, 9 and 11 years old).

Where did shut the box originate 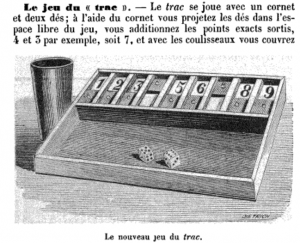 Shut the Box is a traditional pub game. Its origins are probably french as an article about the “Jeu de Trac”, as it was known in France, was published in October 1893in the supplement of La Nature journal.
Shut the box was really popular among sailors and fishermen and appeared in  Britain in the middle of the XX century. It became then very popular in England.

Rules of Shut The Box 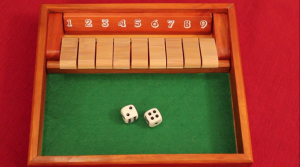 The game shut the box consists of a wooden box and two dice. In the wooden box, there is a total of 9 tiles or levers, numbered 1 to 9.

The object of the game is to close the box or in other words, to lower all the tiles, one roll of the dice at the time.

Players play in turns. Let’s say you start to play: 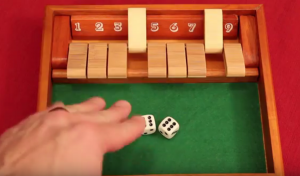 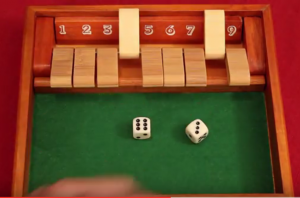 Here, you could close 6 and 3 but your best choice would rather be closing 9 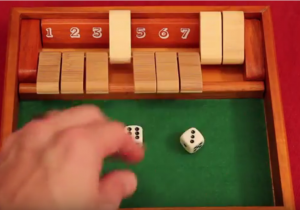 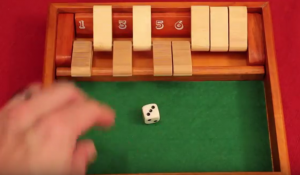 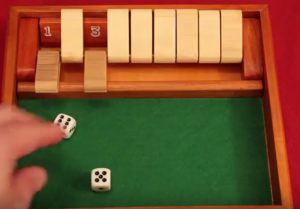 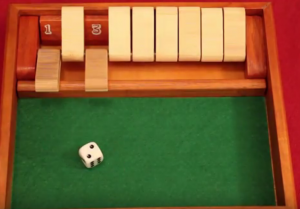 Unfortunately, this will end your turn as you can’t close any tile with a 2.

It is now the other player turn to play.

Winning the game of Shut The box

The winner is the player that scores the least amount of points.

You can either play multiple amounts of rounds and add up your points after each round.Whoever reach a certain amount of points (like 45 points) will lose the game.

Or you could also play a certain amount of rounds, let’s say 5, and whoever has the lowest number of points wins the game.

If any player knocks down ALL the tiles in his or her turn, in other words, “shut the box”, then they would win the game automatically.

In the old days in pubs, Shut the Box was often played as a gambling game, where each player put an equal amount of money into the pot at the beginning of a round.

If or when a player shuts all the boxes in his turn, he wins the pot. If after all players have tried but failed to shut all the boxes, each player adds to the pot the sum agreed upon at the beginning of the game.

Playing shut the Box in a pub can bring a great amount of laughter and create a great atmosphere.

If you are not into gambling money into a pot, you could play with you friends and decide instead that the loser of the game round buys a round of beer for everyone at the bar!

Some “Shut the box” game are numbered from 1 to 12. With this version of the game, you can do the same thing you do with the 9 number version of “Shut the box”. But it takes it a step further. You can still add the dice but you can also multiply them. 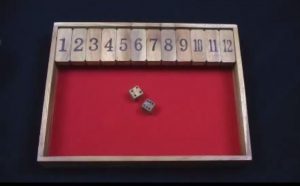 Shut the box is such an enjoyable game. It is a simple dice game that can be so addictive when you start to play.

It is a great way for the kids to work on their math while having fun at the same time with the entire family. Shut the Box can be introduced to young children to learn the value of numbers and work on their arithmetic.

Of course, older members of the family will also enjoy this game a lot. Great way to keep your brain active.

I am personally a huge fan of introducing all sort of board games to children. Board games such as Shut the box, Backgammon, Chess or Go  can be beneficient in a lot of ways to their personal development.

Although Shut the box can be a pretty random dice game, there is a lot more to that. As well as arithmetic skills, there is also some strategy and some decision making in this game.

I can only advise you trying it, you won’t regret it. Any Shut-the-box games are relatively inexpensive. Check out the selection I have made for you below.

Where to buy Shut the box

We will be happy to hear your thoughts